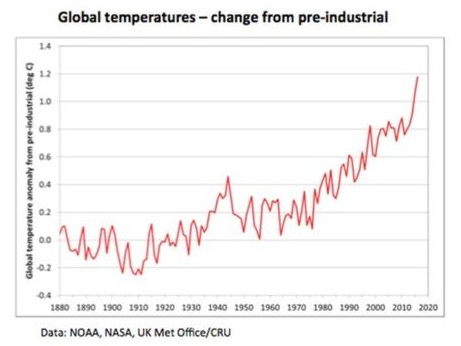 The Climate Change Committee (CCC) has released its report "Net Zero – The UK's contribution to stopping global warming" which gives a clear endorsement to the use of heat pumps for low-carbon heating.

ICAX welcomes the Net Zero report and the key recommendation that the UK should implement policies that lead to Net Zero carbon emissions by 2050. This replaces the earlier recommendation to achieve an 80% reduction of greenhouse gases from 1990 levels by 2050.

The government has also welcomed the Net Zero report and aims to pass the aspiration into legislation in June 2019 to ensure that the UK emits net zero greenhouse gases by 2050.

Global average temperatures have already risen by 1°C from pre-industrial levels, and the effects can be seen today across the world. To limit further warming, deep reductions in emissions are urgently needed. By aiming for and achieving net zero, the UK would remain a world leader in this global effort, and through innovation and experience will be able to help other countries reach similarly ambitious targets.

While the new target is more ambitious, the CCC concludes "that net-zero is necessary, feasible and cost-effective".

The report summarises the scientific evidence for human induced climate change, including evidence collected by the IPCC (Intergovernmental Panel on Climate Change), and discusses international agreements, including the UN Paris Agreement.

The 277 pages are recommended reading but, for those short on time, some quotes are included here:

Surge of concern about climate change sweeps through Europe

Public concern about climate change and plastics pollution in the envirnoment follows on from the documentaries of Sir David Attenborough and the articulate statements from Greta Thunberg on the need for action now to protect the environment for our children and grandchildren.

Chris Stark, the main author of the Net Zero report, said that the revised target in the report has been made possible by changing attitudes of the public to climate change and the reduction in costs of solar and wind power and technology developments in electric batteries. However, the ambitions of the report would fail without concerted actions from government backed up by an appropriate allocation of resources.

ICAX welcomes the more ambitious target of Net Zero greenhouse gases by 2050 and agrees that this is essential to preserve life as we know it on this planet. There is real concern that the report is not ambitious enough and that a greater sense of urgency would have been more appropriate.

See the full report published on 2 May 2019: Net Zero – The UK's contribution to stopping global warming, which runs to 277 pages.

See article on Getting serious about Net Zero before 2050, which runs to just one page.