A heavy snow fall at Heathrow on Saturday 18 December 2010 closed the airport to air traffic. The second runway was not opened for three days. 4,000 flight were cancelled over the first five days and 9,500 passengers spent the night at Heathrow on 18 December. Others suffered delays and cancellations up until Christmas.

Winter 2010/2011 was the third winter running that the running of London airports was severely interrupted by snow and ice.

The threat of 10 cm of snow caused Heathrow to cancel one third of flights on Sunday 5 February 2012: "BAA, Heathrow airlines, and air traffic control have agreed to introduce a reduced flight schedule at Heathrow in order to minimise the disruption to passengers caused by forecast snow and adverse weather".

Why was Heathrow hit so badly in December 2010?

Heathrow operates at up to 98% of capacity. Therefore any delays create knock-on effects, and cancellations. There is a premium value for BAA to be well prepared at Heathrow for any seasonal weather conditions. BAA put its snow and ice disruption cost at £25m in December 2010. BA, the largest airline operator at Heathrow, lost £50m.

What was the key problem at Heathrow? 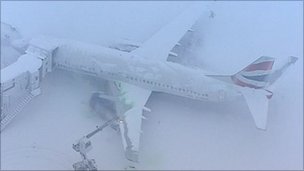 The key problem at Heathrow was not just snow, which can be cleared with snow ploughs, but ice. If ice is allowed to freeze onto the runway surface it will not easily let go. Ice expands when it freezes and bonds to the road surface. It may also damage the road surface. Ice on the surface reduces friction to the point where aircraft braking is no longer consistent or safe.

Because of the hazard of ice the airport tries to avoid it forming by using “anti-icing” chemicals on the surface to lower the freezing point. These chemicals can be easily washed away - an environmental hazard.

Where was the key problem at Heathrow? The ice problem was not just on the runways and taxiways, but on the aircraft parking stands. On Saturday 18 December 2010 all 200 stands at Heathrow had aircraft parked on them. It is more difficult to clear snow and ice from a parking stand with an aircraft on it. These delays, and limited equipment, prevented the two main runways being cleared at the same time. It took three days before the second runway was opened for traffic.

What can be done to keep airports open in very cold weather?

The standard solution is to invest in more snow ploughs to clear the snow more quickly and provide greater resources devoted to chemical anti-icing and de-icing of the runways and aprons. The airports have been reluctant to make expensive investments in the hope that heavy snow does not come too frequently.

Is additional investment in mechanical and chemical ice clearing a green solution?

No. There is a large carbon footprint associated with buying and operating the new equipment and the risk of environmental damage from using de-icing chemicals. The purpose of these Pavement De-icing Products (PDP) or Runway De-icing Fluids (RDF), is to reduce the freezing point of water to cause it to melt. Salt and grit cannot be used as they damage the jet engines they are drawn into. Urea and glycol fluids are environmental hazards and potassium acetates may be linked to carbon brake failures and cadmium corrosion.

What is the alternative?

Ice can be prevented from forming on the aprons and parking stands by feeding gentle heat into the road surfaces through an array of pipes embedded in the surface to maintain the temperature above the freezing point of water: Hot Mats™.

This technique, called Interseasonal Heat Transfer, has been developed by London-based ICAX Ltd and was trialed for the Highways Agency on a stretch of road at Toddington Services. The trial was independently monitored by the Transport Research Laboratory which concluded that the road surface did not freeze – by day or by night – for two winters.

Is maintaining a road above freezing using IHT a green solution?

Yes. The heat to maintain the surface above freezing is collected the previous summer from solar energy on the same road. There is no release of CO2 involved. There is no need to suffer the environmental impact of releasing hostile de-icing chemicals into the atmosphere or the water table. IHT is an automatic computer monitored process that only releases warmth to the road when conditions require this to maintain the surface above freezing. IHT operates effectively even when aircraft are parked on the surface.

The use of IHT to maintain the surface ice-free releases men at a critical time to focus on clearing heavy snow falls – which is more easily achieved when there is no bonding of ice to the surface.

What else can IHT do for airports?

Interseasonal Heat Transfer can extract heat from airport terminals in summer. This form of cooling by transferring heat to cold ground is more efficient, cheaper and greener than employing air conditioning chillers on the roof to "waste the heat" to the hot air outside. It also charges the ThermalBank with heat that can be used for heating the following winter. IHT can provide more than just geothermal heating at Heathrow.

How difficult would it be to install IHT at airports?

Because Heathrow's runways are used intensively every day it would be difficult to install IHT on the two main runways without causing disruption. However, the key problem in December 2010 was on the parking stands. It would be practical to install IHT on groups of the parking stands in batches without interfering with the normal running of the airport in order to improve Heathrow's resilience to ice. 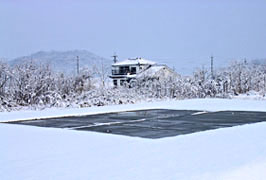