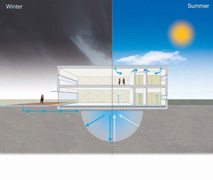 Renewable Cooling is the provision of cooling to buildings by using natural, renewable resources, instead of consuming fossil fuels. The standard solution for providing cooling to buildings is to use chillers and air conditioning which uses a very large amount of electricity: this is expensive and (if the electricity comes from a power station which is powered by gas, oil or coal) will cause the release of large quantities of CO2 into the atmosphere.

The basis of chillers is to use heat pumps to "waste" heat from a building to the outside atmosphere. As cooling is only required when it is already too hot outside the heat pump has a lot of work to do to achieve its objective and this consumes a lot of electricity. This process is inefficient and wasteful: a 2017 BRE report to BEIS, "Study on Energy Use by Air Conditioning", has estimated that 10% of all UK electricity consumption is used to provide cooling.

The effective use of Renewable Cooling requires three keys steps:

While an ICAX Asphalt Solar Collector is designed to capture heat on hot summer days, it is also equally capable of capturing cold temperatures, or "coolth", on cold winter nights. The asphalt is used to reject heat to the night air – which is especially effective on winter nights. [An interesting by-product of taking cold from the Collector is the health-and-safety advantage of inhibiting the surface from freezing].