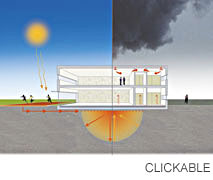 determines the temperature in the ground

The Mean Annual Air Temperature, at any site, is the most significant indicator for the temperature in the ground at a depth between 6 metres and 50 metres. The temperature between these depths is generally constant all year round, provided the ground is left undisturbed, because heat moves very slowly in the ground.

If heat is extracted from the ground by a ground source heat pump, then the temperature will, of course, fall.

The temperature in the first two metres of ground fluctuates with seasonal changes in air temperature at the surface (with time lags), but these fluctuations decrease to very low level by a depth of six metres.

While the MATT is the most significant influence on ground temperature it is not the only influence. Detailed studies in Canada have indicated that where there is a difference, the mean annual ground temperature ("MAGT") tends to be around 1°C higher than the MATT. Ground below south facing slopes (in the northern hemisphere) can show higher temperatures than ground below north facing slopes. Where extensive snow cover provides additional insulating effects in winter the MAGT can be around 5°C higher than the MATT.

The Met Office reports that the mean annual temperature in southern England is close to 10°C at sea level. The mean annual temperture in Scotland and Northern Ireland is close to 9°C at sea level. These temperatures fall by 0.5°C for each 100 metres of altitude above sea level. More detailed temperture information by region is given by the Met Office or from the MIS 3005 Ground Loop Sizing Tables.

The coefficient of performance ("CoP") of a ground source heat pump depends on the "uplift" required between the ground source temperature and the delivery temperature to the building. As heat is extracted from the ground over the heating season the CoP falls. ICAX succeeds in achieving high levels of performance from ground source heat pumps by charging ThermalBanks with solar energy in the summer months so that heat can be obtained more efficiently from warm ThermalBanks in winter.

Effect on ground temperature in London

The Mean Annual Air Temperature in London is higher than for surrounding areas because of solar heat retained by buildings, heat released in London for heating buildings and operating machinery including surface transport and underground trains: "the urban heat island effect". The higher air temperature has led over the years to higher ground temperatures in London with ground temperatures of 17°C having been measured in some areas and temperatures up to 28°C near underground train tunnels. This provides an opportunity to use ground source heating in London with high efficiency and zero on-site gas emissions: no CO2, no CO, no NO2 and no particulates.

Below the ground surface, where the MATT is the most significant influence on ground temperature, the temperature increases by around 2.6°C for every 100 metres of depth.

At the centre of the Earth (4,000 miles deep) the temperature is estimated to be around 5,500°C with most of the heat being generated by decay of radioactive elements.