10% of UK Electricity is used for Cooling

Study on Energy Use by Air Conditioning

10% of UK Electricity is used for Cooling and Air Conditioning

BRE has published its Study on Energy Use by Air Conditioning which was commissioned by DECC, now BEIS. This two year study concludes that up to 10% of all UK electricity use is for air conditioning and cooling. Much of this is used in offices and retail space, with a high proportion being used in London and the South East. Because of the firm trend toward increased use of cooling, the proportion of UK electricity used for cooling is set to rise further.

The standard method of providing cooling is fundamentally inefficient as it is based on heat exchange with hot air. The heat is deliberately wasted into the atmosphere.

There is a better way to achieve cooling in buildings. Instead of heat exchanging with hot air, the alternative is to heat exchange with cold water from the ground.

Because heat tends to move naturally from hot sources to cold destinations, it requires a lot of energy to force heat into hot air.

The alternative is to offer heat the chance to escape to cold water.

The BRE Study found that the vast majority of the cooling is provided at an SEER of between 2 and 3. If the Seasonal Energy Efficiency Ratio (SEER) of electricity used for heat transferred is between 2 and 3, the efficiency ratio in the peak month of July may well be less than 2.

By contrast, the SEER of heat exchange with cold water from the ground can be as high as 40 if the only electricity used is for a circulation pump. If heat pumps have to be engaged to transfer heat to the ground the SEER may fall to a level of 8 or 10.

BRE notes that "Recent innovation in air conditioning systems for buildings has been – and seems likely to remain – largely in the form of incremental engineering improvements to existing products and systems rather than through radical change". ICAX believes the time is right for a radical change and the radical change is to stop rejecting heat into hot air and to start to exchange heat with cold water. This is the direct route to energy efficiency and decarbonising cooling. 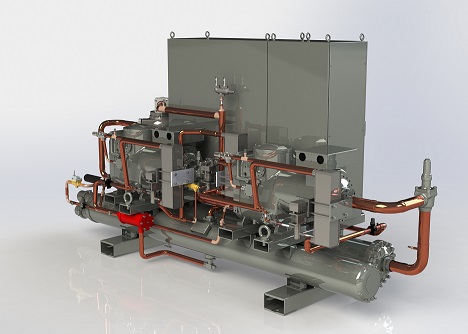 A further benefit of heat exchanging with the ground is that this increases the heat in the ground over the summer months. When heat is required in the building the following winter then heat pumps can draw heat more easily from warm ground and therefore provide a higher Coefficient of Performance for heating the building in winter. This form of heat recycling is very efficient: joined-up heating and cooling.

Energy efficiency is a key objective of BEIS. Heat recycling is the ultimate energy saving measure.

The Committee on Climate Change report calls for energy saving and joined up thinking. Let's hope the Government can see the connection between renewable heating and renewable cooling.

Silver Bullet for Decarbonisation of Buildings

It has been said that "there is no silver bullet for the decarbonisation of buildings". We disagree. The Silver Bullet is called "ground source energy". The UK needs to adopt a policy of joined-up heating and cooling based on thermal energy storage in the ground and heat transfer.